Sights and Sounds Among the Hubbub

On April 4 and 5, the Chinese Heritage Foundation, in collaboration with China Insight, presented the second annual A Passage to China, an interactive journey, at Mall of America in Bloomington. With 40 Chinese community and local organizations, together with a New York-based bookseller, participating, preparations leading up to the event had been intense. The arrivals, from China, of 4 life-sized terra cotta warriors and 10 custom-made 6-foot tall lanternsraised the pace of

excitement. Long after the Mall had closed for the day, a team of volunteers worked hard to uncrate and move the warriors in place, while another team hung the lanterns, numerous large silk kites, and the two newly commissioned bamboo and silk entrance gates. A specially constructed bamboo butterfly arbor provided the last touch in transforming the huge, impersonal space of Best Buy Rotunda into a congenial and welcoming Chinese landscape of human proportions.

This free event, staged at Mall of America to attract an audience that would not normally attend Chinese events, generated much publicity among local media, press and television, as well as magazines. Lines were forming before the event officially opened at 11 AM on either Saturday or Sunday, and the crowds stayed long past the closing hour at 5 PM.

Amid the hum, some might say roar, of bustling activities for children at various tables, many adults were engaged in earnest conversations with colleges and universities that offer Chinese Studies programs. A quiet painter demonstrating the ethereal and spare art of bamboo painting was miles (it seemed that way as one navigated slowly through the throngs of attendees) away from the robust and colorful paintings of a peasant painter from China. A joyous child, dancing

with her newly made Mongolian harmonica, whirled past a serious Caucasian American intent on his game of go with his Chinese host. A serious-minded Chinese scholar pondered the life-long implications of the Chinese name he was about to bestow upon the eager Scandinavian child in front of him, while his neighbor, the fortune teller, raced to put a positive spin on a fortune josh stick that spelled anything but fortune to the child’s mother.

A smiling and obviously proud Chinese elderly lady strolled the lanes in the Rotunda, leaning on her cane. Approval shone in her eyes as she watched children entranced in the making of Chinese lanterns, opera masks and pop-up butterflies. She warmly greeted relatives and friends from out-of-town who had traveled, expressly at her urging, to attend this gathering. This scene was played out over and over as other Chinese seniors greeted their long-time friends whom, due to increasing age and frailty, they no longer saw frequently. Many also had come with their grandchildren, eager for the opportunity to show the new generation a sliver of their ancestral culture that they had held so close to their hearts. 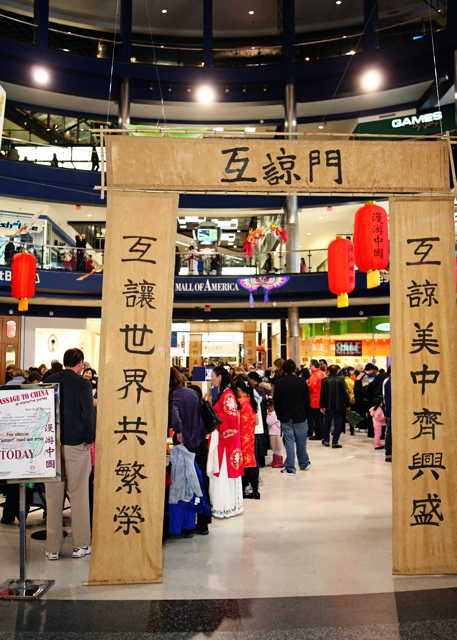 The desire to mentor the next generation was evident among many professional artists who performed in Sears Court on Sunday. They chose to forgo the opportunity of performing solo and opted instead to share the stage with their protégés. As the audience, literally filled to the rafters, looked on, the Mongolian dance teacher danced off-stage in leading her young charges on-stage through an intricate series of turns and tumbles, renowned cellist Yali You performed with student Michael Wu, guzheng expert Li Jiaxiang with pupils Jarrelle Barton and Lisa Veronneau, and pipa virtuoso Gao Hong with her Carleton College Chinese Music Ensemble.

No Chinese event is complete without a lion dance. The Minnesota International Lion Dance Association lives up to its name, counting among its troupe Caucasian and African Americans as well as Chinese Americans. Their dance through the center aisle of the Rotunda and their charming individualized greetings brought giggles to young and old alike. Tai chi, tea ceremony and cooking demonstrations completed the Chinese experience.

A 10-foot-tall bamboo arbor stood quietly behind the head tables, displaying creative and colorful butterflies submitted by school children from throughout the Twin Cities. Flanked by two life-sized terra cotta warriors, the arbor celebrated the age-old Chinese absorption with butterflies, a symbol of true love as immortalized by the tragic story of the Butterfly Lovers, Liang Shanbo and Zhu Yingtai.

In forming a public/private partnership to produce this event, Chinese Heritage Foundation 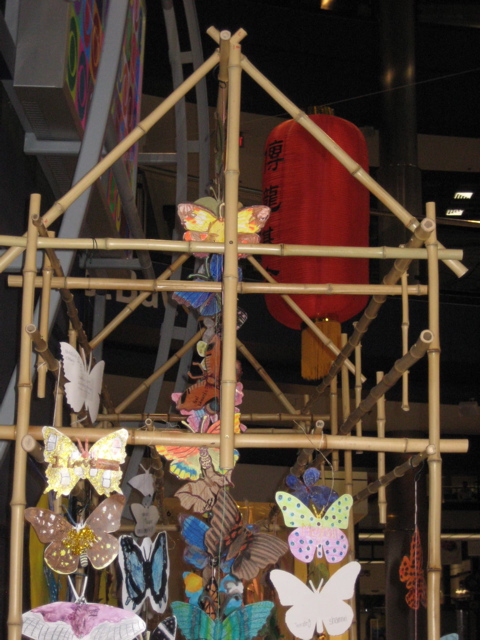 and China Insight have taken a small step forward in the goals spelled out in the two entrance gates: mutual understanding and mutual courtesy among all peoples around the world. They were aided in this quest by Mall of America, a model corporate citizen, who put its considerable resources at their disposal. They were also blessed with an army of volunteers who devoted hundreds of hours to bring about this entirely volunteer-produced event. A Passage to China, a metaphorical journey into understanding one’s self and one’s place in the world, will continue to strive to enchant and illuminate Chinese culture, history and geography in an increasingly interwoven world.