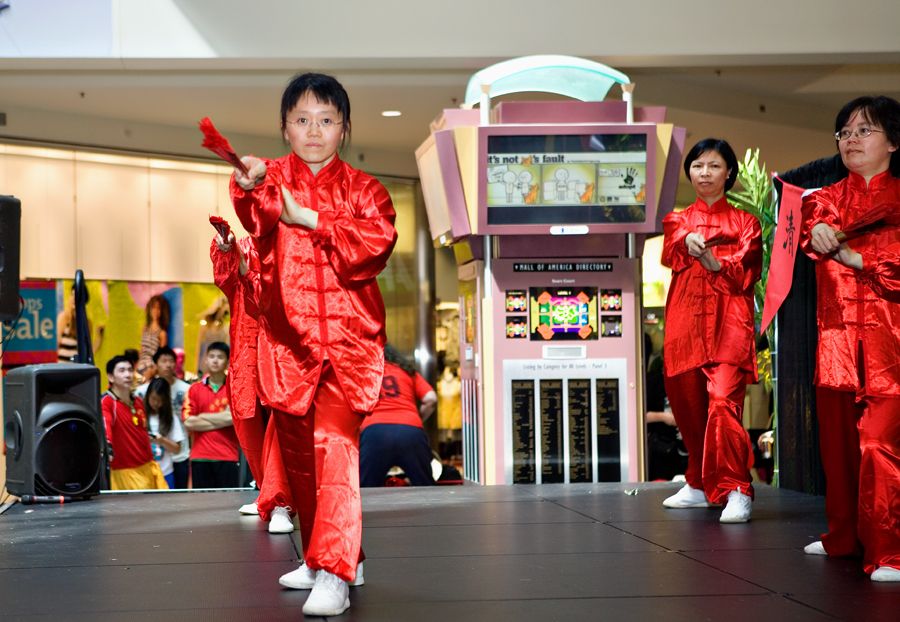 It was the custom in a traditional Chinese extended household that all family celebrations were to be carried out on the family compound. To accommodate the expected overflowing crowd of invited guests, a bamboo pavilion would be constructed on the family grounds, and famous local chefs would be called in to prepare the feast in the family kitchen. And that was the way it was at the third annual A Passage to China that took place on the weekend of May 22 and 23 at Mall of America.

For this weekend, A Passage to China took over Best Buy Rotunda, Sears Court and the hallway in between, as its family compound. The extended family, created by the joint efforts of the Chinese Heritage Foundation and China Insight, consisted of 55 Chinese organizations and area major arts and educational institutions that had come together to celebrate the event’s twin goals of promoting mutual understanding and mutual courtesy.

Coming into the Rotunda through our gates that featured the stylish calligraphy of Zhenpu Mao, 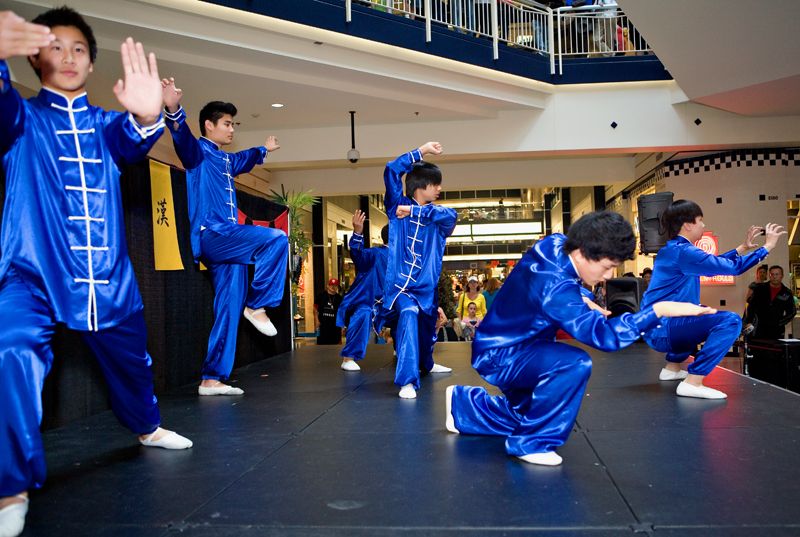 visitors were greeted by friendly hosts and hostesses dressed in the traditional Chinese attires of an emperor, an empress and a wedding couple. To one side of the gates there was a floating bamboo ceiling, decorated with native Chinese wisteria and forsythia blooms, that hovered over a specially created eating area, while Panda Express did the honors of assuming the role of the local chef (i.e. from the third floor of the Mall.) The blooms from another native Chinese plant, the woody peony, shared the spotlight with the native American herbaceous peony, on the quiet round tables under the bamboo ceiling. From this cozy, simulated bamboo pavilion, guests could survey the continuous stream of families coming through the gates.

Spread out before these families was a central octagon of tables flanked by semi-circles of tables on both sides. This new arrangement of tables brought an airy feel to the Rotunda and allowed for a smooth traffic flow, eliminating the congestion problem we had last year. At these tables there were many interactive games for both children and adults. The activities ranged from Chinese word recognition, cultural quizzes, use of chopsticks, ancient games of Chinese chess, tangrams, paper cutting and paper folding, to dumpling making, pop-up cards, trivia language wheels, Mongolian flutes, stick horses and ribbon sticks. The highlight for participants, after completing these activities, was of course coming to the Chinese Heritage Foundation and China Insight head tables to collect their prizes. This year, in addition to the by-now traditional gold coin necklace there was a jade bracelet, consisting of a genuine green jade bead threaded through to a piece of color-matched bead string. Little girls, and many adults who were young at heart, found this bracelet irresistible. 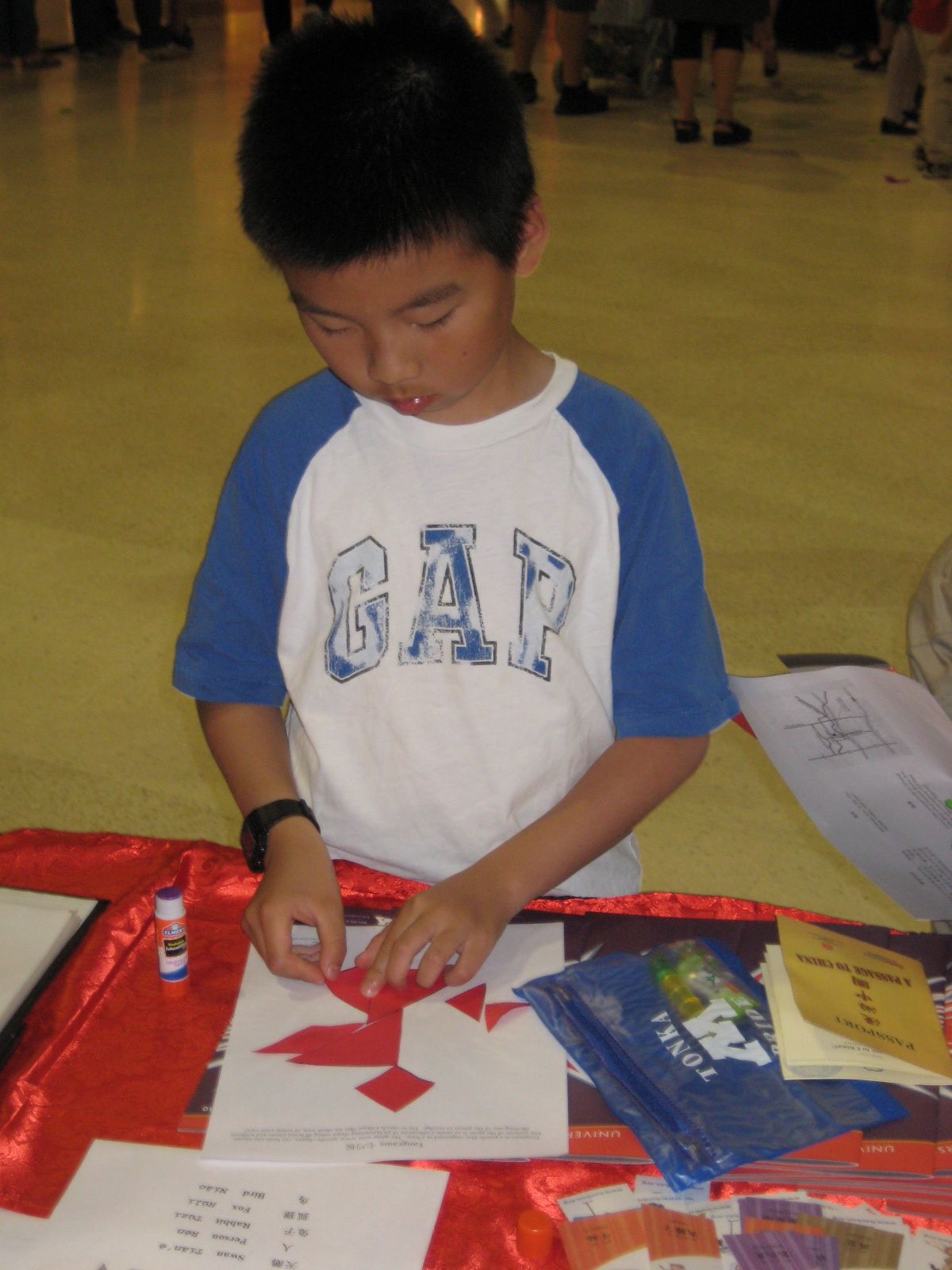 Exiting the Rotunda, visitors en route to Sears Court were greeted by two full-sized terra cotta warriors spotting beaming smiles. Along the hallway there were vendors of Chinese antiques, crafts, books, calligraphy, musical instruments and small terra cotta warriors, the last a fundraising item for the Chinese Heritage Foundation. Sears Court itself was brimming with continuous cultural performances on both days. In addition to traditional Chinese singing, dancing, and instrumental playing, there were many performances in tai chi and qigong that amply demonstrated the health and wellness aspects of these Chinese art forms. The fluid movements of Peihue Lu and Hengde Zhang in their tai chi with sword/fan/softball belied the strong discipline and underlying physical fitness that these ‘dances’ require. There was also tai chi for diabetes and arthritis performed by the Normandale Community College program. These and other new offerings, including the western classical Zene String Quartet performing Taiwanese folk songs, brought to a satisfying close two intense days of cultural performances.

The Chinese Heritage Foundation and China Insight are thrilled with our growing list of participating organizations and deeply grateful for everyone’s collaboration and cooperation in bringing to fruition another highly successful outreach event. United in our goals of promoting mutual understanding and mutual courtesy we look forward to many more occasions of working together.