2017 Dream Premieres in Beijing and Tours to Changsha and Wuhan

Words cannot express adequately what the last 12 months have been like for our opera, Dream of the Red Chamber. There have been so many wonderful celebrations and unexpected highs.

Press notices have been numerous. Many of those in China echo the editorial published in the Guangming Daily. Many writers were amazed that a major opera based on Dream had been conceived and produced overseas. This amazement was followed by genuine admiration for this creation by an all-Chinese artistic team, and support for Dream’s role in promoting mutual understanding among nations.

The Chinese audiences, however, did not wait for any prodding from the press. They took action and bought tickets to the performances as soon as tickets came on sale. The two performances at the Hong Kong Arts Festival sold out in two days. The same held true for each of the two performances in Beijing, Changsha and Wuhan.

In September of this year (2017) several of us, Meiling Sanders, Sonja Tilbury, Ann Waltner, and Bob and Pearl Bergad, traveled to Beijing to attend the China premiere of Dream. This premiere and the subsequent tour to Changsha and Wuhan, could not have happened without the intense involvement of SF Opera.

Director Matthew Shilvock and Doreen Woo Ho from his board, together with SF mayor Edward Lee, worked tirelessly for many months, making numerous trips to Beijing to negotiate with various Chinese entities on various aspects of the tour. Matthew recognized that ‘there is an important role that the SFO plays in validating the project and creating an invaluable layer of political goodwill and cross-cultural partnership.’ He also called Dream ‘one of the most exciting American-Chinese cultural bridges to emerge in recent years.” 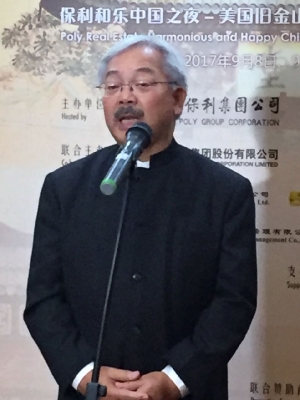 There was a press conference before the premiere at the Poly Theatre in Beijing on September 8. Mayor Edward Lee, was there. So was the U.S. ambassador, the UN ambassador, and the EU ambassador, as well as many Chinese officials and representatives of several major European music festivals. There were many speeches and everyone talked about the important role Dream would play in world cultural exchanges. They lauded the twin goals of the Chinese Heritage Foundation (two of them mentioned CHF by name) to promote Chinese culture and to foster mutual understanding throughout the world.

We attended both performances in Beijing. We noticed that in contrast to both the SF and Hong Kong audiences, the audience here consisted primarily of young people, most likely those who have grown up with the two popular TV series of Dream. There were some prominently serious-minded older attendees as well. They had probably all read the novel. They sat forward on their seats, intent on absorbing all artistic rendering taking place on stage. And there were many changes since Hong Kong: composer Bright Sheng was conducting for the first time, and there were several changes in the cast members. The role of DaiYu was sung alternately by two Chinese sopranos: Wu He and JingJing Li. CHF donors will recall that JingJing came to MN two years ago to sing in the Dream preview that CHF held at The Marsh. For this Beijing performance she incorporated many physical movements (in particular, with her hands and face) from traditional Chinese opera and she moved with ease on stage. She made a very convincing DaiYu and conveyed a real sense of intimacy with BaoYu in the love scene in Act I.

There were subtle changes to both the libretto and the score as well. With Bright conducting, the tempi for many arias were now exactly what he had intended all along. He also inserted ‘room’ at several places in the love duet between BaoYu and DaiYu in Act I, thereby giving them the time to discover and develop their love for each other.

Bright also highlighted several of the ‘Chinese’ elements in his score. For the first time the wailing clarinet solo in the wedding scene was heard clearly, offering a warning that things would not end well. Also heard was the somber and poignant ‘qing’ in DaiYu’s drowning scene, offering solace and closure. As Bright had intended, the instruments carried these scenes. No singing was needed.

On the day after the first performance, CGTN, Chinese Global Television Network, an English news channel of China Central Television based in Beijing, broadcast a lengthy feature on Dream, detailing its development, its impact on the U.S. audience, and its role on the international stage.

Prominent among the speakers was U.S. Ambassador Terry Branstad. He was pleased that Dream had originated in the U.S. and that it would now help to improve U.S. China relations. He hoped that there would be more cultural exchanges between China and U.S.

Another speaker was Wray Armstrong, CEO of Armstrong International Music and Arts Enterprises. He is the San Francisco Opera- 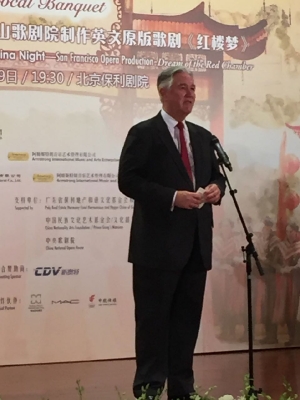 appointed presenter of Dream on tour and fully understands its importance. For him, ‘Combining the high artistic level of opera with the best in Chinese culture, this opera is giving extra deep meaning to Chinese/International cultural exchanges.’ He is committed to taking Dream to more cities in China, as well as South East Asia, Europe and then perhaps Canada and then back to the U.S. He envisions this to be a 10-year commitment for his Company. To have a champion like him is beyond one’s imagination.

There were numerous advance press notices/reviews in Beijing. We saw posters advertising Dream at the Prince Gong Mansion, as well as on the fast train from Beijing to Guangzhou! Here is a link to more press notices.

Soon after we returned to Minneapolis word came that U.S. Secretary of State Rex Tillerson had just met with Chinese Vice Premier Liu Yandong. The topic of their inaugural meeting on September 28 was on U.S.- China Social and Cultural Dialogue.

The media note from the State Department’s website was brief, stressing people to people ties between the two countries. But the press release from the China Xinhua Agency was extensive and specific. Of particular interest was the topic of Cultural Dialogue, under which both countries pledged to promote the interchange of outstanding artistic undertakings that would further mutual understanding between the two countries. One of the examples cited was SF Opera’s production of Dream of the Red Chamber.

To read the entire press release in Chinese, click here.

It is overwhelming that Dream, in just its first year of existence, has achieved such importance in U.S. China relations. In looking back to our Objectives when we first embarked on this project all those years ago, we were hoping that commissioning Dream would help to carry out CHF’s mission to preserve and promote the understanding of Chinese culture and heritage, to encourage innovation in the arts, and to improve mutual understanding between the Chinese community and the world community at large. It looks like we are on our way. We are optimistic that Dream will continue to evolve and become a significant work that will contribute to peace and understanding among the world community for many years to come.

To visit our photo gallery, please click here.  These photos include those taken on visits to designer Tim Yip’s studio and Cao Xueqin’s former residence in Beijing.