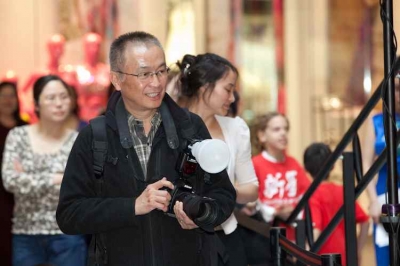 Soprano FeiFei Shen,申霏霏, a graduate of the People’s Liberation Army Academy of Art (中国人民解放军艺术学院) in Beijing, has forged a phenomenal career in a very short time.  In addition to being an accomplished singer in traditional Chinese opera, she has championed both contemporary works and popular music.  Her world premiere performance and recording of ‘李清照, Li QingZhao’, an 11th-century Chinese woman poet, has become an instant modern classic; and her performance of the song, ‘To be Married to a Dog’, in honor of the current Chinese Year of the Dog, has become a runaway bestseller. She appears frequently on national television in China and, in 2017, was voted one of the top ten exponents of traditional Chinese music.

Feifei is coming to the Twin Cities at the invitation of the Minnesota Chinese Dance Theatre, and will participate in the Theatre’s Annual Rainbow Concert Series on December 8 at the St. Paul Student Center of the University of Minnesota.  She has graciously agreed to come to us the next day, Sunday December 9, to present a lecture/performance recital on traditional Chinese opera.  In collaboration with our very own Margaret Wong, she will explain the symbolism and purpose of many of the traditional movements and will take you on a journey through some established favorites in Chinese opera, such as ‘Dream of the Red Chamber.’

Details on this exciting event are listed below. All proceeds received at the concert will go to FeiFei, to help defray her traveling expenses.  So please mark the date, come and bring family and friends!

CHFF Board of Directors