Life As Is: The blending of Ancient Souls from Syria and China 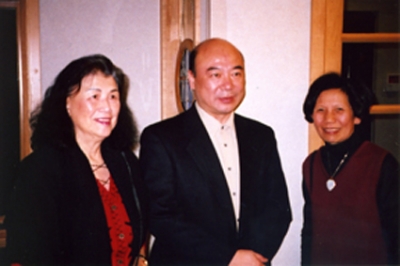 Syrian Oud Master Issam Rafea and Chinese Pipa Master Gao Hong to release Life As Is: The Blending of Ancient Souls from Syria and China April 25th at The Cedar

Minneapolis, MN: Syrian oud master Issam Rafea and Chinese pipa master Gao Hong will perform at The Cedar Cultural Center Center for the release of their new album Life As Is: The Blending of Ancient Souls from Syria on Wednesday, April 25th, 2018.

Issam Rafea and Gao Hong instantly bonded when first met, and immediately committed to recording and performing together. Their music sounds both ancient and strikingly modern at the same time. It is neither Chinese nor Arabic, but something fresh and new that only they can produce. Both musicians are immigrants, and seek to create performances that immigrants from any culture can enjoy and relate to.

Since they only play improvisations, no two performances from the duo are ever exactly the same. In concerts, they ask for titles from audience members and then create instantaneous site-and audience-specific pieces based on the suggested titles.

Both Issam’s instrument, the Arabic lute called the oud, and Gao Hong’s instrument, the Chinese four-stringed lute called the pipa, originated from the same ancient instrument – the Persian barbat. Though the pipa has been altered considerably throughout its 2000-year history, it originally resembled the 5,000-year old oud and is thought to have been introduced to China through the Silk Road.

Their new album Life As Is: The Blending of Ancient Souls from Syria will be released worldwide by Innova in May, 2018. CDs will be available for purchase at The Cedar show.