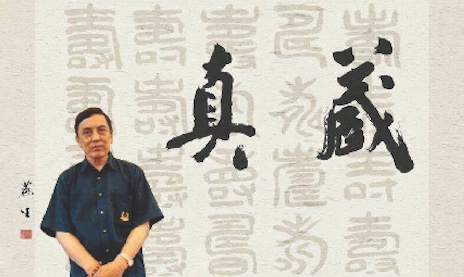 On February 10, 2018, well-known calligrapher Zhang Yansheng presented his work to an appreciative audience.

Calligrapher Zhang YanSheng 张燕生 was born in Beijing in 1953. Growing up in a scholarly family he was steeped in the traditional discipline of calligraphy and studied the calligraphy of all the famous calligraphers such as 王羲之 from an early age. However, his first career as a young adult was in films. He was a science film director at the China Agricultural Film Studio and later at CCTV. During his seven-year tenure there he created dozens of popular science films, documentaries, feature films, scenery films, urban films and large-scale theatrical performances.

In 1985, at age 32, he decided to return to calligraphy and entered the Chinese Painting and Calligraphy Extension University (later known as The Chinese Painting and Calligraphy International University).  He came under the tutelage of famous calligrapher Ouyang Zhongshi 欧阳中石, and following graduation, joined his advanced studies group.  It was during this period that, coupled with his innate understanding of the art form, Zhang honed his own style as a calligrapher. Concurrent with this development, he immersed himself in philosophy. Since then he has subscribed to the belief that one’s calligraphy reflects one’s personality, integrity, and achievements; and that one’s calligraphy can reach new heights only when one’s heart is pure and square.

In 2011 Zhang participated in the cultural and artistic exchange activities associated with the 2011 Beijing International Mind Sports Games. His scroll of the 1826-word Amitabha Sutra 佛说阿弥陀经, in small script, was very well received; and his three title banners, International Mind Sports Games in Chinese 国际智力运动会, were presented to the President of the World Sports Federation at the conclusion of the Games. They are now part of the Federation’s permanent collection at its Swiss headquarters.

Zhang’s mature works often reflect the peace and quiet of water, at times soulful, at times fleeting and mystical like the winds; but they are always scholarly, guided by a higher understanding. His style is always elegant and dignified. His brush strokes are robust and steady, conveying strength and gentleness at the same time. At times these strokes and characters are like thunder and rain, and yet at other times they look chiseled like a fine piece of jade carving. There is always a feeling of freshness to his completed works. They are like a fresh lotus blossom rising from a pond, or a deity floating down from heaven, always commanding the viewer’s attention and admiration.