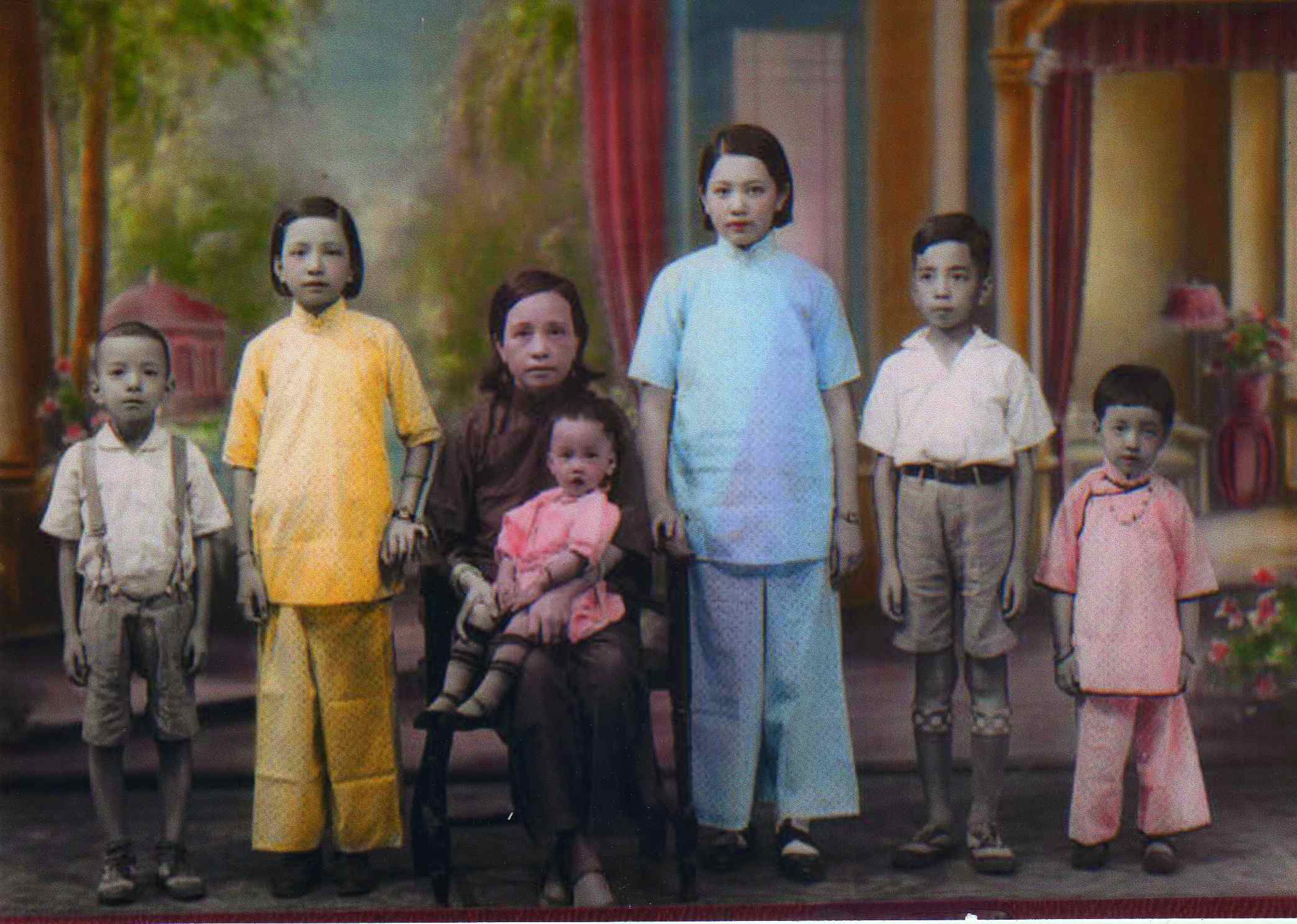 Memoir by Walter Hong, written in 2004 and provided by his family

I was born in Minneapolis in 1927 and when I was five years old, my father decided to take my sisters, brother and me back to Hong Kong so that we could attend a Chinese school and acquire a Chinese educational foundation before we joined the American school system. So in 1932 our family went back to Hong  Kong, but when the Japanese Imperial Army invaded Mainland China in 1937 my father changed his mind. So our family returned to Minneapolis.  (Ed.’s note: Walter was the older boy in the above family photograph.  The younger boy was Jimmy, who went on to become a legendary Hollywood actor and star.)

Since I couldn’t speak any English, school administrators in Minneapolis put me into first grade, with 6-year olds even though I was 11. I felt so humiliated, but it motivated me to study hard in English. I caught up rapidly and succeeded in finishing Eighth Grade at the end of five years.  By this time, 1942, the Japanese invasion of China had intensified and Pearl Harbor had been bombed. Having spent 5 years in Hong Kong and hearing about Japanese actions in China first hand had impressed upon me the desire to join the U.S. Army to fight Japanese aggression. But I still had four years of high school to finish, before my parents would allow me to go.

Mr. Herbert Park, a close friend of my father’s and a Board Member at Pillsbury Military

Academy in Owatonna, heard of my dilemma and decided to help. He recommended that I be admitted to Pillsbury.  I began as a freshman there and took regular classes during the day; but in my off hours I received special tutoring, by many sympathetic teachers, in Science and Math, English and Literature and other subjects at the junior and senior levels. Thus I was able to finish four years of high school in two years and graduated from Pillsbury in the spring of 1944. Thus I had attained my goal of graduating at the age of 18, so that I may join the military service.

One of the requirements for graduation at Pillsbury was participation in the Seniors Oration Contest. After much thought and research, I decided my topic would be “Our Relationship with

China, Our Ally”.  Our contest coach, Major Jones who was one of my tutors, gave me extra guidance and coaching in many intense practice sessions.  As a result I won the Contest and received an award at our  graduation ceremony. Little did I anticipate that in the following years I would be deeply involved in China’s Civil War and, as an American, helping to enforce the negotiated truce.

Among those attending my graduation ceremony at Pillsbury were my family and Miss Angst, my Chinese Sunday School Teacher in Minneapolis. She was my first English teacher in 1937 when I first returned from Hong Kong and could not speak a word of English. She was so proud of me for winning the Oration Contest.

During my two years at Pillsbury, our daily Chapel Services, conducted by our Headmaster, Mr.  Strayer, made the most impression on me. Mr. Strayer’s sermons were so searching and sincere. They were a  demonstration of how seriously he took his duty as Headmaster and spiritual guide to his young charges. In addition, his wife, Mrs. Strayer, taught Sunday school classes in plain and sincere English. Christianity was a new  religion to me at that time. My first exposure to it at the Minneapolis Chinese Sunday School now blossomed into a profound faith under the influence of Mr. and Mrs. Strayer. It was, and is, the greatest gift a person can receive.

After I graduated from Pillsbury, I began studying engineering at the University of Minnesota and preparing for the written entrance examination to West Point at the same time. Mr. Herbert Park, who had helped me get into Pillsbury two years ago, decided to ask Congressman Walter Judd to sponsor me for the examination. But even with that sponsorship I did not manage to get in, as only the top two scorers received appointments that year.

I then decided to join the U.S. Army seeking to enter U. S. Military Intelligence and Language School at Fort Snelling, Minn. Fortunately, I got in and graduated two years later in 1946. I was assigned to the Office of Strategic Service (OSS), the forerunner of the CIA, and, since WWII was over by then, given the assignment of enforcing the negotiated truce between the Nationalist (Chiang Kai-Shek) and the Communist (Mao Zedong) Parties in China’s civil war. My assignment took me to the mist of their battlegrounds in several places in China. Fortunately, I got out unharmed. The  outcome of the civil war was tragic for the Nationalists. The  reports, as published by our U. S. State Department and white washing  the blames, were erroneous, as I had personally witnessed the  situations; but those erroneous reports have since become history.

However, the best thing that happened to me during my assignment to our OSS Headquarter

in Shanghai was meeting a beautiful young lady soon after I arrived. Her family had come from Canton three generations ago, and she had learned to speak Cantonese from her  parents. The Cantonese dialect is that of Hong Kong’s and similar to the Taishan dialect spoken by the  majority of the Chinese immigrants to the U.S. at the time. Thus we were able to communicate in our native dialect. We fell in love and married soon after.

When I returned from China I returned to the University of Minnesota and graduated with a degree in Engineering. In the ensuing years I worked as an engineer for the U. S. Army Corp of Engineers in Los Angeles, the North American Aviation Inc.’s Missile Division in Anaheim, and the Agency for International Development in Thailand. While in Thailand I was an advisor to government engineers in training them to build up the country’s infrastructure such as highways, bridges, water supplies and sanitation facilities. It was gratifying work.

My wife and I have been happily married for 58 years  now. Our four children, two girls and two boys, are all in their fifties or nearly so. We are blessed with nine grand  children, four girls and five boys, ranging from four months old to thirty years old.   I continue to be thankful for the Christian influence that Pillsbury had given me in those early years, particularly as I now look back, in my graying years.