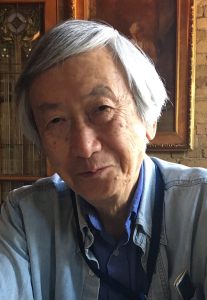 Weiming Lu was born in 1930 in Shanghai, China. It was a tumultuous period throughout China then, full of political turmoil and civil wars, with the Japanese Invasion and Occupation in between and more civil war afterwards. For part of his childhood, Weiming, his sister and their mother were separated from their father, a prominent architect planner and a high-ranking government official who was frequently away on government business for long stretches of time. Communication was difficult, and Weiming saw firsthand how his mother struggled, in silence and alone, to keep him and his sister fed. He knew what hunger was and never forgot the lessons he learned from his mother, of perserverance, persistence, and quiet resolve.

Weiming’s father had high hopes for his son. Expecting and therefore naming him to be great 偉 among his people 民, his father exerted a profound influence on him. Trained in France, his father passed on to his son his love of the European Modernists, Le Corbusier among them. Weiming absorbed from his father the Modernists’ perspectives on architecture, art, philosophy, and urban planning, all of course, with an eye on Chinese esthetics. Weiming also pursued all the traditional Chinese accomplishments expected from a gentleman: art, calligraphy, and poetry. These pursuits stayed with him throughout his life.

In 1949 ahead of the Communist takeover of the Mainland, Weiming’s father moved the family to Taiwan where he continued to serve the Kuomingtong government. Weiming enrolled in the Cheng Kung University and graduated with a degree in civil engineering in 1952. On the recommendation of a family friend, he moved to the US to continue studying civil engineering at the University of Minnesota. He met his future wife, Caroline Chang, there and they married in 1957. Then following in his father’s footsteps, Weiming decided to pursue a second master’s degree in city and regional planning at University of North Carolina. 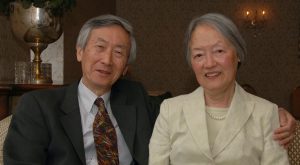 For several years following graduation Weiming and Caroline embarked on a global lifestyle that took them to Europe and Japan before settling in Minneapolis where Weiming took the position of chief of environmental design in the City’s planning department. Thus began his illustrious and brilliant career in city planning, urban renewal, historic preservation, and advocacy for artists. It has all been meticulously portrayed in an essay in the Minnesota Alumni Magazine by Camille LeFevre: https://www.minnesotaalumni.org/stories/life-by-design

Amidst his rapidly rising career and wide recognition, Weiming never forgot his homeland. He and Caroline returned to Taiwan often to visit their parents and, at one time, seriously considered returning to Taiwan. While enticing offers kept them in the US, Weiming developed a deep friendship with the mayor of Taipei who frequently sought and implemented his advice. After Mainland China opened in the 1970s Weiming was frequently invited to visit cities in China, always generously offering his expertise, experience, and perspectives on urban design. On occasion he also served as an adjudicator for design competitions. His worldwide impact grew and he was the recipient of numerous awards, among them a distinguished achievement award from the University of North Carolina.

Within the Chinese community, both locally in the Twin Cities and nationally in the US, Weiming was always willing to offer his advice and expertise, and to mentor the younger generation. For many years he served as Vice-Chair of the prominent national organization, Committee of 100.

In midlife Weiming returned to one of his first loves, Chinese calligraphy. He 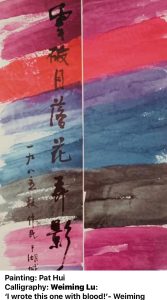 developed a unique style involving computer graphic designs and began holding exhibitions internationally. He met with and hosted artists/poets/calligraphers from China and Hong Kong, often in partnership with Hui Arts and the Minneapolis Institute of Art. He also invited urban planners from China and Taiwan to visit Lowertown during his 26-year-tenure there. He would take them to vantage points in Lowertown that would offer sweeping views of the Mississippi River and challenged them to think big. He never tired of nurturing and opening new minds to creative possibilities.

Even in his tenth decade, Lefevre wrote that Weiming was still looking ‘for ways to learn from different cultures….I’ve had so many ways to express myself, and I’m thankful. I’m grateful for the chance to serve.’

His was a life well-lived.  His wife, Caroline, and son Kevin and daughter-in-law Monica, survive him.

Robert D. Jacobsen, 卓儒博,1944-2021
Robert Jacobsen grew up in Roseville, MN, and developed an early interest in art, woodworking, architecture, and photography. He pursued several degrees at the University of Minnesota, first concentrating on art history and architecture. Returning from an interim study at the University of Canterbury in New Zealand, he stopped off in Japan and promptly fell in love with its art and architecture.
Read More…
Weiming Lu, 盧偉民, 1930-2022
Weiming Lu was born in 1930 in Shanghai, China. It was a tumultuous period throughout China then, full of political turmoil and civil wars, with the Japanese Invasion and Occupation in between and more civil war afterwards. For part of his childhood, Weiming, his sister and their mother were...
Read more...
© 2022 by Chinese Heritage Foundation. All rights reserved.