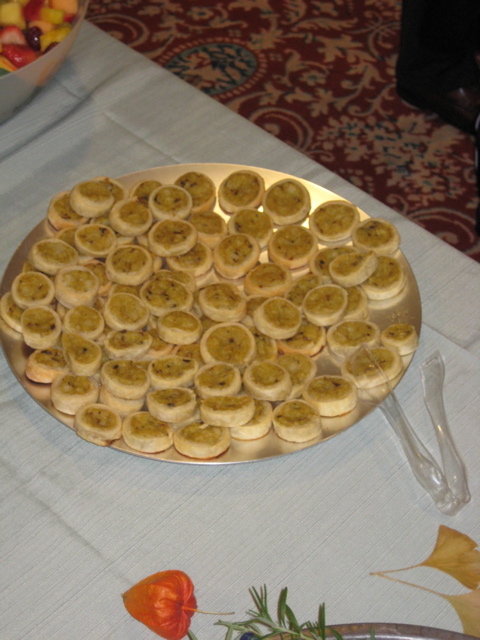 On a brilliant Sunday afternoon on October 18, 2009, the Chinese Heritage Foundation (CHF) held its Fifth Annual Open House at Gramercy Park. It was a landmark celebration for this new organization. In five short years the Foundation has built a solid reputation as a creditable and responsive organization in the Chinese community and beyond. Its grant making has gone to outstate locations such as Hutchinson, St. Cloud and Alexandria, fulfilling its funding mission to bring Chinese arts and culture to all of Minnesota. Likewise its volunteer calligraphy team is traveling throughout the metropolitan area, doing name translations and presenting lecture/demonstrations in settings as varied as schools, corporate campuses, and multicultural festivals.

On this Sunday afternoon a bustling team of volunteers has prepared delicious snacks such as crispy peanut triangles, char sui, fresh crab sandwiches, curry potato cakes, and almond cookies, complemented by an inviting fresh fruit salad and cashew nuts. Special brewed teas, compliments of TeaSource, made for a satisfying midafternoon high tea. Master of ceremonies, Ida Lano, introduced organizations that had received grant awards from the Foundation in the past year. This list included Arts Midwest, Minnesota Center Chorale and Minhua Chorus. A fellow of the CHF Fellowship, established in perpetuity in the History Department of the University of Minnesota, also spoke. CHF Committee members then

presented a brief summary of CHF activities, including the highly successful second presentation of A Passage to China at the Mall of America. Stephanie Hall, events coordinator at Mall of America, was present to announce next year’s date for this exciting outreach event.

To acknowledge the importance volunteers play in its activities CHF, an entirely volunteer-run organization, instituted an annual Volunteer of the Year Award this year. The first award went to David B. Lam, the leader of the calligraphy team. In addition to name translations and lecture presentations, David has also been the resident fortune-teller. Many a hare-brained scheme has been warned off by David’s grave admonition that anything not thoroughly planned is not worth the risk involved.

Following its by-now well-established tradition, CHF honored outstanding Minnesotans with its Chinese Minnesotan of Note Award. The award, posthumously this year, went to Walter James. The full essay had already been published in both China Insight and Minnesota China Tribune. On hand to receive the award were Walter James’ grandnephew and niece. Both Charles and Linda James spoke movingly about the tremendous influence Walter James had on their lives and the lives of so many others.

The audience, made up of founding and annual members, and also many new young professionals, mingled freely and enjoyed studying the special exhibition of calligraphy by Moon Fong, a well-loved nonagenarian member of the Foundation. Moon also was on hand to sign her new book, Reflections, giving all the proceeds to benefit activities of the Foundation. After many cheerful conversations everyone started to leave, laden with warm feelings for the Foundation’s achievements and looking forward to more good things to come.

2009 Visit by Flower Drum Song Author C. Y. Lee
C. Y. (Chin Yang) Lee, author of Flower Drum Song, came to the Twin Cities in June to attend the opening performance of Mu Performing Arts’s production of the 2002 Broadway revival of the Rogers and Hammerstein musical based on his novel. Spry and active at 93, Lee enjoyed this updated production very much and pronounced it a wonderful successor to the 2002 Broadway production.
Read more...
2009 Visit by Veteran Hollywood Actor James Hong
On September 11 the Chinese Heritage Foundation, in collaboration with China Insight, welcomed James Hong, veteran Hollywood actor and Minnesota native, back to the Twin Cities. Hong was in town to attend his 1947 class reunion at Central High School.
read more...
2009 Ming Tchou Birthday Party
It was five years ago at Ming Tchou’s birthday party that she announced the creation of the Chinese Heritage Foundation. It has been an eventful five years since then for everyone at CHF. To mark Ming’s continuing commitment to CHF, several friends got together to throw a surprise birthday party for her. She arrived at the home of Ida Lano on August 9, expecting
Read more...
2009 Open House
On a brilliant Sunday afternoon on October 18, 2009, the Chinese Heritage Foundation (CHF) held its Fifth Annual Open House at Gramercy Park. It was a landmark celebration for this new organization. In five short years the Foundation has built a solid reputation as a creditable and responsive organization in the Chinese community and beyond. Its grant making has gone to outstate locations such as Hutchinson,
Read more...
© 2022 by Chinese Heritage Foundation. All rights reserved.