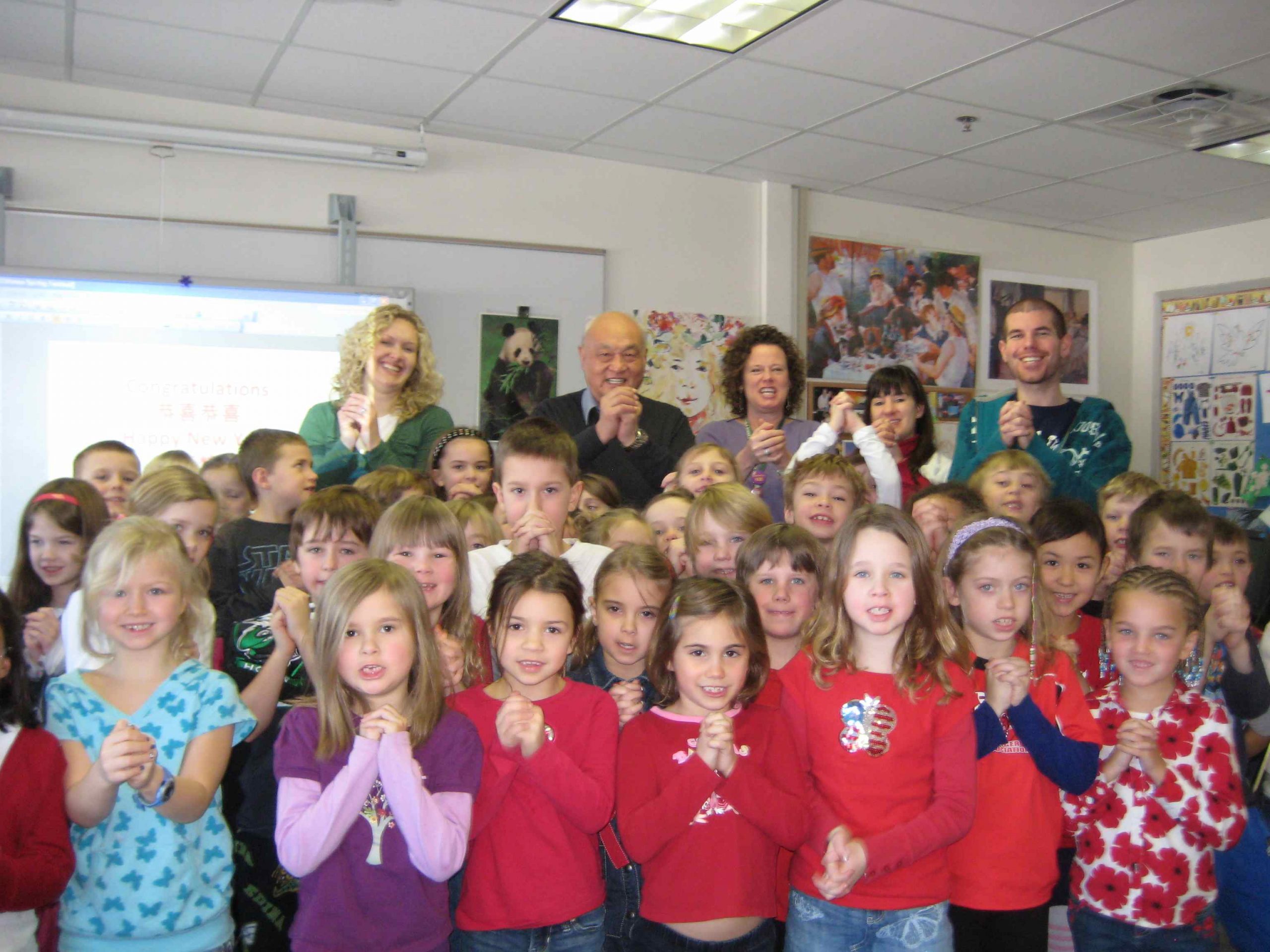 busy this year, answering calls for their expertise from around the metropolitan area. Over two days in February they presented four talks on Chinese New Year traditions and myths to over 200 first graders in Edina schools, including the Normandale French Immersion School. These vivacious kids clamored to name the 12 animals that made up the Chinese clock, and sat in rapt attention as Stephen Mao described the hungry beast that was let out of its jail on every New Year’s Eve to devour everyone in sight. Thus was born the custom of congratulating everyone, ‘gong xi, gong xi’, on New Year’s Day: for having survived the beast! With their fists thus cupped in the traditional Chinese manner, the children then lined up to offer Stephen and Ming Tchou ‘gong xi’. In return they each received a hong bao stuffed with a lucky penny. Now no harm will come their way until the next New Year’s Eve.

Midtown Global Market — The Calligraphy Team then headed across town to Midtown Global Market on February 4 to anchor its Chinese New Year celebration. Many young families, often with grandparents in tow, came to have their names translated or their fortunes told. How should the fortuneteller answer an earnest golden-haired little boy’s query on whom he would marry? Or what to say when his parents drew a josh stick that painted doom? The answers were and will remain the secrets of the fortuneteller.

The Marsh — The next day, February 5, the Team traversed town again, this time to the celebration at The Marsh in Minnetonka. Organized with the advice of Yin Simpson, the event began with a rousing lion dance by the Minnesota International Lion Dance and continued with the 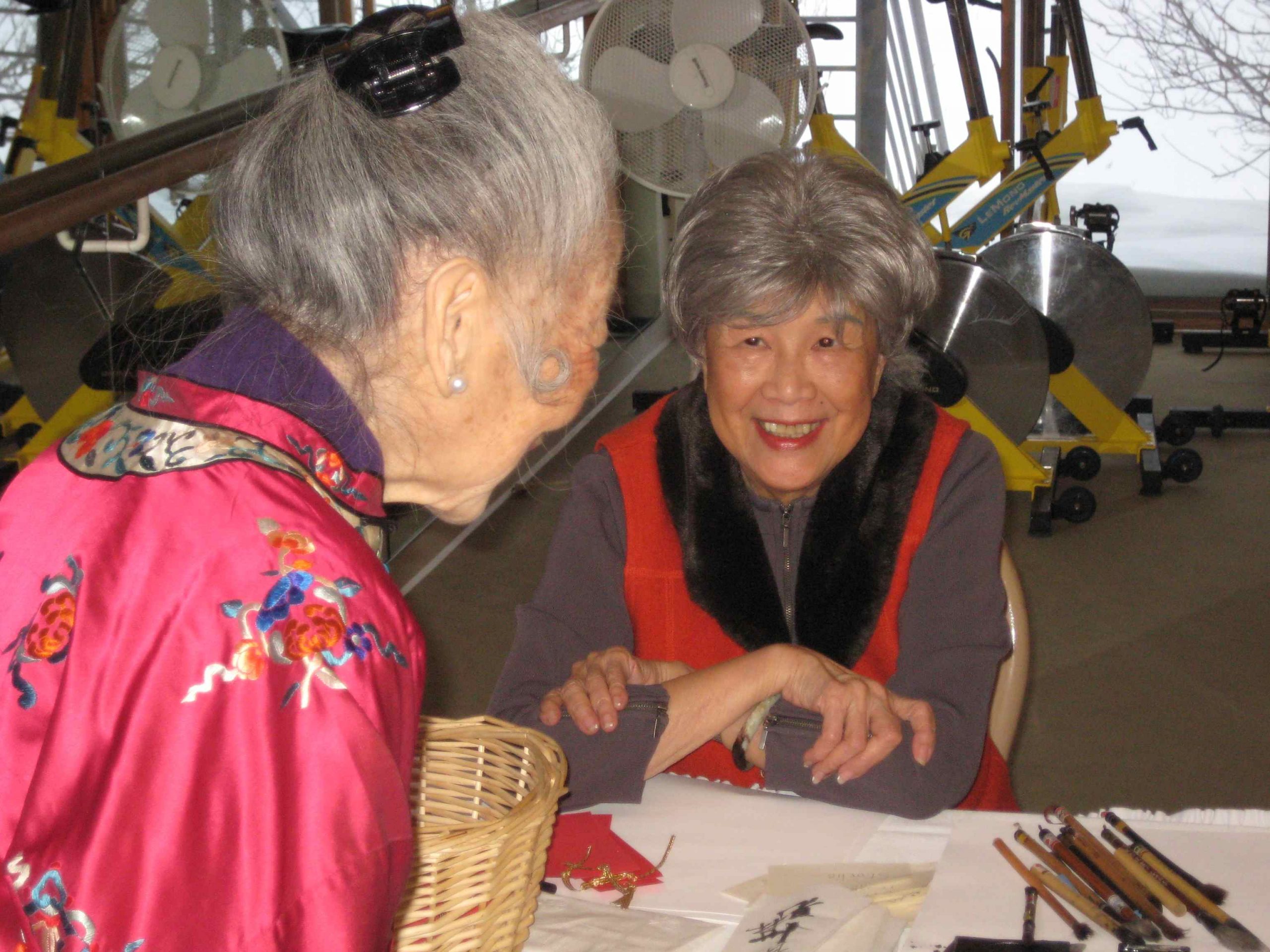 Team plying its signature role of name translation and fortune telling, this time augmented by the paper cutting expertise of Hong Lin. Inspired by the natural settings of the Marsh and its adherence to inner well being, many of the fortunes drawn that evening related to oneness with nature, inner journeys of peace and family harmony. The airy rooms, with their walls lined with windows or adorned with exquisite Chinese silks, paintings and calligraphy panels, provided the soothing environment conducive for discussions on Zen and meditation.

Minnetonka Schools — Tired but energized by interactions with so many interested kids and their parents, the Team returned to Minnetonka the following week, this time to the high school for its Chinese New Year celebration. Prevalent among the attendees here were kids enrolled in the Chinese immersion program at Minnetonka and the Chinese adoptees. It was a joy to hear so many kids rattling off their Chinese names and then to see them recognize their corresponding Chinese characters. A debate over the appropriateness of their names then arose: was there sufficient exhortation for the child to better him/herself? Would the child grow up to meet the high expectation inherent in this particular combination name? What about the deeper meaning of grace? A Chinese father’s heart never rests.