C. Y. (Chin Yang) Lee, author of Flower Drum Song, came to the Twin Cities in June to attend the opening performance of Mu Performing Arts’s production of the 2002 Broadway revival of the Rogers and Hammerstein musical based on his novel. Spry and active at 93, Lee enjoyed this updated production very much and pronounced it a wonderful successor to the 2002 Broadway production. He was pleased that his East-meets-West story is now speaking to a new generation of theatergoers and Chinese Americans.

Lee also renewed his acquaintance with David Henry Hwang, the playwright of the 2002 Broadway

revival, and met with the cast of the Mu production. He was very pleased to see so many established and emerging Asian American actors in the Twin Cities. Encouraging more Asians, particularly Chinese, to go into the performing arts has been one of his life long goals.
Many in the Chinese community, including some who were Lee’s contemporaries in Kunming during WWII, came to the opening night to meet him.

They also came the next evening to Jun Bo Restaurant to attend a dinner and dance in his honor. Lee loves to dance and spent a good part of the evening on the dance floor. He also enjoyed the special performances presented by members of Daniel Lai’s 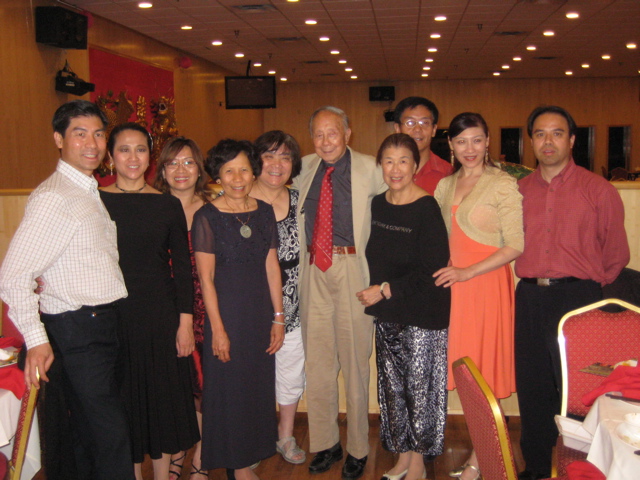 Chinese American Ballroom Dance Association and for DanSa.
Ming Tchou, president of CHF, is a long time friend of Lee’s, and hosted him for five fun-filled days here. They toured many Twin Cities cultural landmarks, including the newly refurbished Cherry at the Walker Art Center’s Sculpture Garden. Lee had a wonderful time and promised to return very soon.