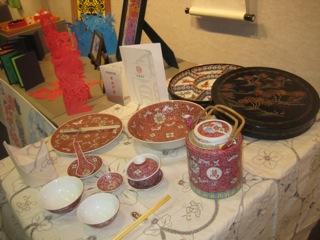 For the Chinese portion of this exhibit, CHF Friends assembled a fine collection of silk robes, silk lanterns, fine china and porcelain, ivory and jade chopsticks, calligraphy scrolls, delicate paper cuts, as well as informative posters on traditional Chinese games such as chess and go. Under the guidance of our master designer, Yin Simpson, we created a display that was both eye-catching and informative. The Gallery was located in a high traffic area within the Government Center and the exhibit was seen by thousands of downtown workers and visitors. The Library received many positive comments about the variety and quality of the entire exhibit.

The exhibit was sponsored by Hennepin County Library and Hennepin County Human Services and Public Health. The Gallery is a project of Hennepin County Public Affairs.May was proclaimed by the US Congress as Asian Heritage Month to mark two important Asian American milestones: the first Japanese immigrants arrived on May 7, 1843, and the transcontinental railroad was completed on May 10, 1869. The majority of workers who laid the tracks were Chinese.